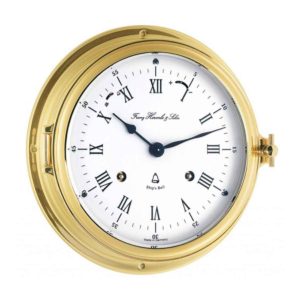 At this point the bell strike pattern begins again at a single strike at 4:30 a.m. and counts up to eight strikes to 8:00 a.m.. This pattern of bell strikes – one to eight at half hour increments over four hours, is repeated throughout the day, breaking the 24 hours in the day into six distinct periods.

The ship’s bell system of chimes evolved from a crude sand clock dating back to the time of Columbus. This primitive clock was called a sand or sandglass clock, was a glass tube pinched to a narrow point in the middle, to allow sand to pass from the top half of the tube to the bottom half at a specific rate of time; and was an essential device for marking the time at sea.

Records of epic voyages tell us about this device and how the helmsman used it to measure time in half-hour increments by turning the glass when the sand ran through. It became customary to strike a bell at the same time so that whole crew knew the time; starting with one bell strike at the end of the first half hour, two at second and so on until reaching eight bells, which signalled the end of the four hour period. The tradition of the sand clock continued for hundreds of years and was replaced only by the development of the mechanical clock. But, it was not until the 19th century that the first mechanical ship’s bell clock was produced in America. The principle of this American innovation remains almost unchanged to this day.

Work shifts or “Watches”, were organized into increments of four hours on ships’ as mariners need to work 24 hours a day to keep the ship sailing; these four hour period are indicated by the ship’s bell system. Crews were organised into into teams that would work one four hour Watch and then rest before their next working Watch.  However, as this four hour pattern resulted in six distinct periods in 24 hours – an even number, this meant that watch keepers would work the same Watches, repeatedly, day in, day out.

To introduce variation in the Watches and avoid this scenario, a mechanism called the “Dog Watches” is used.  This occur in the 4:00 pm to 8:00 pm period, by splitting it into two shorter two-hour stints, and by doing so introduce a seventh – uneven number of periods.  These short Watches also assist in the logistics of providing an evening meal for the whole crew, around the same time slot.

This website uses cookies to improve your experience while you navigate through the website. Out of these cookies, the cookies that are categorized as necessary are stored on your browser as they are essential for the working of basic functionalities of the website. We also use third-party cookies that help us analyze and understand how you use this website. These cookies will be stored in your browser only with your consent. You also have the option to opt-out of these cookies. But opting out of some of these cookies may have an effect on your browsing experience.
Necessary Always Enabled
Necessary cookies are absolutely essential for the website to function properly. This category only includes cookies that ensures basic functionalities and security features of the website. These cookies do not store any personal information.
Non-necessary
Any cookies that may not be particularly necessary for the website to function and is used specifically to collect user personal data via analytics, ads, other embedded contents are termed as non-necessary cookies. It is mandatory to procure user consent prior to running these cookies on your website.
SAVE & ACCEPT